Alexander von Humboldt was born in Berlin on 14 September 1769, the second son of retired Prussian major and court chamberlain Alexander Georg von Humboldt and his wife Marie-Elisabeth von Hollwede, née Colomb. Two addresses are given as his place of birth: Jägerstrasse 22, and the family’s summer home Tegel Castle.

Six-year-old Alexander was raised by private tutors alongside his brother Wilhelm, who was two years his senior. Already at this early age he showed an interest in natural history and botany, hence his family’s alleged nickname for him: “the little apothecary”. The young boy enjoyed reading about expeditions and voyages of discovery. In 1783 he completed a drawing of the “Halbkugel der neuen Welt” (hemisphere of the New World) and drew a graphic illustration of the Copernican planetary system. 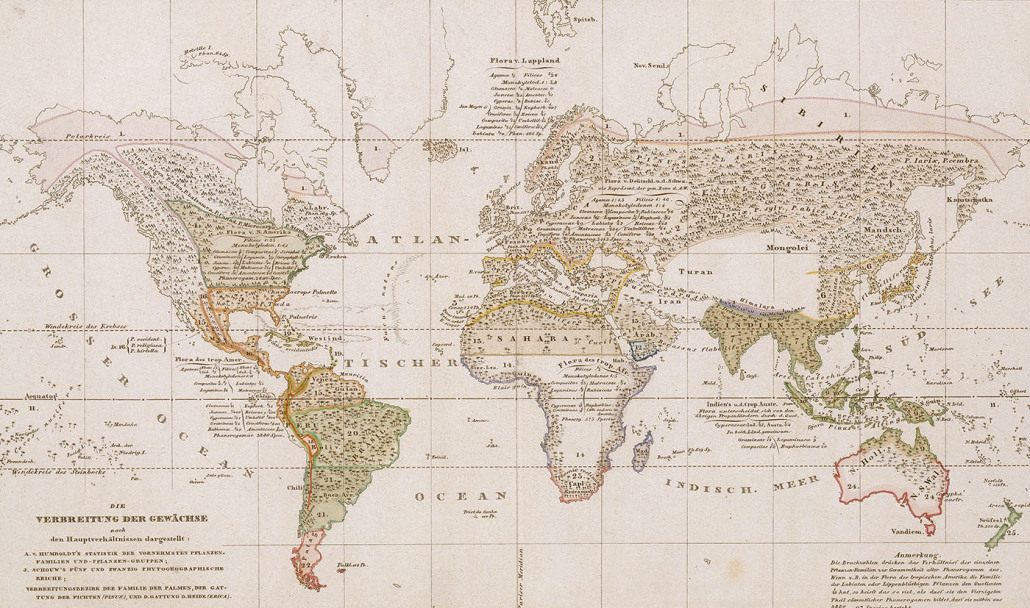 Even as young children, the Humboldt brothers had easy access to Berlin’s Enlightenment circles: Kant’s pupil and physicist Marcus Herz and his wife Henriette, who remained Alexander’s lifelong soulmate, gave them encouragement of all kinds at their social gatherings. Carl Ludwig Willdenow, later director of Berlin’s Botanical Garden, introduced Alexander to botany. Another of Alexander’s boyhood friends was Berlin banker Joseph Mendelssohn. In 1787 the Humboldt brothers moved to Frankfurt an der Oder in order to attend the local university for a year. Wilhelm was to study law and Alexander political economy (government accounting). In 1789 both brothers changed to Göttingen, where Alexander became familiar with the philosophy of Georg Friedrich Lichtenberg and the works of zoologist and anatomist Johann Friedrich Blumenbach.

Alexander set out on his first research adventure in 1789, accompanied by Dutch physician Steven Jan van Geuns. They travelled from Kassel, to Frankfurt am Main, along the mountain road to Heidelberg and Mannheim, and finally to Mainz, where the two men lodged with Georg Forster, renown for having accompanied James Cook on his second South Sea expedition between 1772 and 1775.

In the civil service

Civil service duties took the confident, hard-working young aristocrat to the Franconian principalities of Ansbach and Bayreuth. In 1793, using his own funds, Humboldt established an independent mining school in Steben, the aim of which was to improve the technical knowledge and working conditions of the miners in the area. Inspection trips led him to Austria and Silesia. Additionally, he travelled to Vienna and undertook geological and botanical expeditions to Switzerland and the Tyrol, where he carried out his first methodical, large-scale meteorological data assessments. He left the civil service in 1797. The death of his mother in November 1796 made the brothers heirs to a large fortune, allowing them to live independently. Alexander began preparing for a research journey, though it was not yet clear where it would be. His botanical research (Florae Fribergensis specimen, 1793) and numerous physiological experiments, which he published in 1797 in a two-volume work entitled Versuche über die gereizten Muskel- und Nervenfaser (Experiments on Stimulated Muscle and Nerve Fibres), gained attention in the European scientific world. In late 1794, while staying at the home of his brother Wilhelm in Jena, he met Johann Wolfgang von Goethe, with whom he exchanged information on the natural sciences.

Ideas for a major research voyage to Italy, the West Indies, Egypt or the South Pole had to be put on hold due to the uncertain political situation in a Europe, still in the throes of the French Revolution and the first Napoleonic conquests. When plans for another expedition, this one from Marseilles to North Africa, had to be abandoned because of French troop movements, Humboldt, with support of Spanish Minister Mariano Luis de Urquijo, succeeded in preparing a research expedition to South America. The expedition parted from Spain, where – following a socially and scientifically fruitful period in Paris, the centre of arts and sciences at the time – he had been living since the winter of 1798 in the company of the physician and botanist Aimé Bonpland.

The Spanish Government was interested in having the state of its colonies’ mines investigated by an expert. Spain’s King Carlos IV thus provided Alexander von Humboldt papers that would ensure him free movement and support from viceroys and officials during his trip to the American colonies.

On the 5th of June 1799, the Pizarro set sail from La Coruña’s harbour. On board were Alexander von Humboldt, his companion Aimé Bonpland, and an arsenal of avant-garde physical and astronomical instruments. After a brief interim sojourn in Tenerife, the ship arrived at Cumaná in modern-day Venezuela on the morning of July 16th 1799. Here Humboldt and Bonpland began their exploration of the Upper Orinoco and its confluence with the Rio Negro. This scientific research is one of the most celebrated geographical undertakings of the eighteenth century.

After visiting Cuba in 1801, Humboldt travelled on to modern-day Colombia and Peru. The expedition from Bogotá to Lima via Quito ended with him in June 1802 at the foot of the Mt. Chimborazo, then considered to be the tallest mountain in the world. Though Humboldt and his companions did not reach its summit, they set an altitude record (among Europeans) of approximately 5,600 metres. In September 1802 Humboldt achieved one of his childhood dreams: on his trip to Lima he caught sight of the Pacific Ocean for the first time. 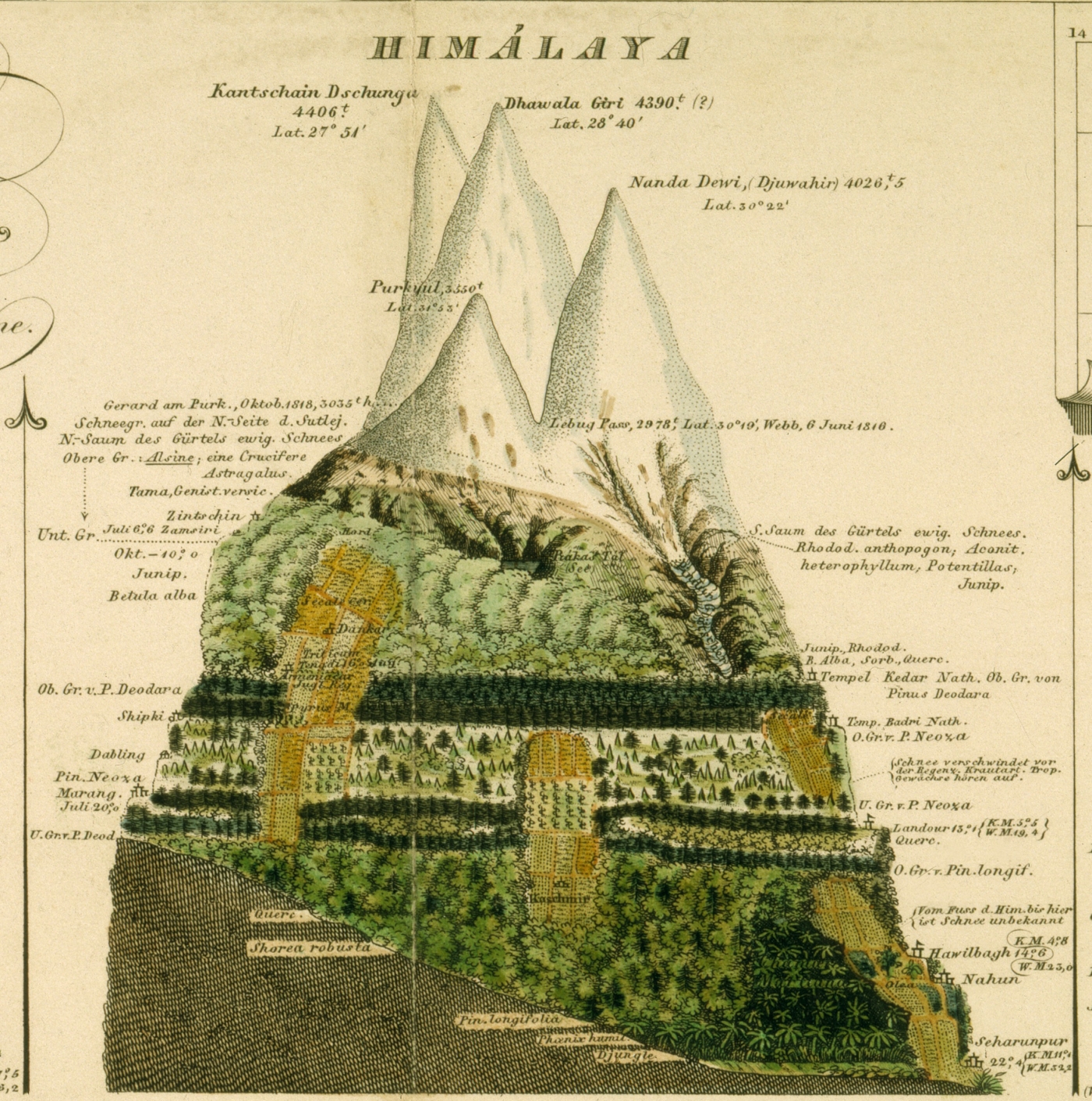 Alexander von Humboldt made the best of his sojourn in Peru. While in Callao he was able to determine, with the use of astronomical calculations, the precise length of the country´s capital, Lima; he also sent samples of bird excrement – “guano” – to Paris for analysis. On his return voyage along the coast to Guayaquil he took measurements of the cold oceanic current that pulls along the Peruvian coast. This current was later named the “Humboldt Current” in his honour. After this he spent a scientifically fruitful period of more than a year in Mexico, then known as the Viceroyalty of New Spain. During this period Humboldt travelled from Pacific Acapulco, through Mexico City, to Atlantic Veracruz, and all the way to Cuba. He eventually boarded a ship from Havana, where he deposited the scientific finds which he had made before his Andean journey as well as all his botanical collection, and sailed to Philadelphia.

In Washington he met American President Thomas Jefferson, whom he admired and whose knowledge of natural history fascinated him. Shortly thereafter he embarked on the journey home aboard the frigate La Favorite, along with Bonpland and 40 crates full of scientific naturalia and notes. In early August of 1804 Humboldt finally set foot again on European soil, as the frigate dropped anchor in Bordeaux.

In Paris, Humboldt – who had at the time already been declared dead by a number of newspapers – quickly became the hero of the day. There he worked on organising and distributing his collections, and in the spring of 1805 made his way to Rome, where his brother Wilhelm was the Prussian ambassador to the Vatican. In February of 1805 Humboldt was elected as a full member of the Prussian Academy of Sciences. In December of that year Frederick Wilhelm III awarded him the post of Royal Chamberlain. That same year, with the aid of colleagues and friends, Humboldt worked on geomagnetic measurements, held lectures at the Academy of Sciences, and wrote the Ansichten der Natur (Views of Natur, first ed. 1807). His Essai sur la géographie des plantes accompagné d’un tableau physique was also published in 1805. In the following year he was part of the entourage of Prince Wilhelm, Frederick Wilhelm III’s brother, on a diplomatic mission to Paris. There he undertook the publication of his approximately 30-volume American travel research: Voyage aux régions équinoxiales du Nouveau Continent fait en 1799, 1800, 1801, 1802, 1803 et 1804 par Alexandre de Humboldt et Aimé Bonpland. In 1827 he returned to Berlin at the behest of Frederick Wilhelm III. During the winter semester of 1827-1828 he held 61 lectures on Physische Erdbeschreibung, mit Prolegomenen über Lage, Gestalt und Naturbeschaffenheit der Gestirne (Physical geography, with prolegomena on the location, formation and natural composition of the stars) at the university. In December he began a series of 16 public lectures on the same subject at Berlin Sing-Akademie.

The journey to Russia

In the spring of 1829 Humboldt was able to commence his long desired expedition through Asia. On a six-month journey at the invitation of the Tsar he was to undertake mining and geological evaluations in the Urals. During this trip he visited St. Petersburg, Moscow, Nizhniy-Novgorod and Kazan. His research into the Urals began from Yekaterinburg. Humboldt’s wish to also cross the Chinese border and enter Tibet, however, was not fulfilled. Shortly before Christmas, and after a journey of 18,000 kilometres, Humboldt was back in Berlin. Humboldt used the scientific knowledge gained from this expedition, among other things, to launch a joint international project for investigating geomagnetism.

In late 1834 Humboldt began his work on Kosmos, the book on which he would work until his death. This was a project Humboldt had dreamt of since his childhood: the idea of a “physical cosmography.” It was nothing short of an account, ambitious both artistically and scientifically, of the entire world. In this work Humboldt synthesized the natural sciences not only as they existed at the time, but as they had developed from the Ancient World to his own day, in the form of a cultural history of knowledge. This “fantastic” idea, as he had confided in a friend, was conceived as an imaginary journey through the universe, beginning with the remotest fogs of Space, and making its way through the most varied spheres of knowledge, the stones and mosses on Earth, to the animals and people. The first volume was published in 1845; he finished the fourth at the age of 89, and the fifth volume was published posthumously after his death.

In 1842 Humboldt became the first Chancellor of the Order Pour le Mérite, established by Frederick Wilhelm IV. After the failed revolution of 1848, he was met with constant hostility at court for his liberal political views. In December 1857 Humboldt secured a legal amendment at court, bringing the abolition of slavery to Prussia. In 1856 the scholar and teacher, lauded as the champion of science, world-famous and highly honoured, and a member of many scientific academies, was awarded honorary citizenship in his native Berlin, where he died on 6 May 1859.

Further information can also be found on the website of the Alexander von Humboldt Research Project of the Berlin-Brandenburg Academy of Sciences.